The Bio-Mat is a thermo-therapy device that combines two known factors in the maintenance and restoration of health:
Far Infrared and Negative Ions. 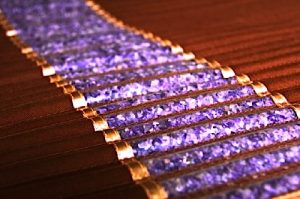 Far-Infrared Rays (FIR):
Body temperature regulation is vital for health. When the body temperature drops by only 1˚, more than 3000 essential enzymes cannot perform their function. Immunity is lowered. Cancer cells and other pathogens thrive in low body temperature environments. Through applying FIR waves to the body, the BioMat raises the body’s core temperature, stimulating an immune response   and creating a more inhospitable environment to all pathogens.

How Far-Infrared Works:
Everything in the universe emits and absorbs wave energies. On the electromagnetic spectrum, infrared waves are longer than those in the visible range.

FIR penetrates more deeply into the body than its cousin near-infrared. Although we don’t see FIR, at the molecular level, FIR exerts strong rotational and vibrational effects that are biologically beneficial. This healing ability stands in contrast to the damaging effects of short wavelengths, such as UV light, X-rays & gamma rays.

Our bodies’ ability to sense heat is mostly at the skin level. Although we may not feel the effects of the FIR as we are receiving the treatment, nevertheless, the effects of FIR on bioprocesses is profound and long-lasting.

NASA certainly understood some of these effects when it developed FIR materials to insure cardiovascular integrity during space travel. Hospitals have also taken advantage of some of the properties of FIR to keep newborn babies warm in incubators.

The BioMat has FDA approval as a medical device and has similar certification from the Japanese Ministry of Welfare, which applies the strictest criteria in the world for medical device approval.

Negative Ions:
When the body is deficient in negative ions, cell channels are closed and cellular communication ceases. Nutrients can’t be absorbed and waste can’t be eliminated. Through generating an abundance of negative ions, the BioMat facilitates cellular metabolism, enhances vitality and distributes nutrients throughout the body.

How Negative Ions Work:
There are more than 60 trillion cells connected in the human body. These cells communicate with one another, sending and receiving information and nutrients and also excreting wastes. This extensive network within the body of cellular communication is possible because of the existence of ionic channels distributed throughout the body connecting the cells (a 1991 Nobel Prize winning discovery).

Without negative ions, the cell channels cannot open; nutrients cannot be distributed throughout the body, and wastes, can’t be excreted.

A study at Columbia University showed that exposure to negative ions relieved depression as much as antidepressants.

Healing Applications of the BioMat:

To learn more about the health benefits of FIR, check out this article by Helen Nichols: 16 Science-Backed Health Benefits of Far-Infrared Rays.