Skip to Main Content
[You can view the original article HERE.]

I’m notorious for trying any kind of crazy or fad treatment if I see the words “healthy” or “benefit” anywhere in its description — and if I see “glowing skin” in there, well then sign me up! So when I saw one of my friends, that friend being the DJ Va$htie, getting a colonic on Snapchat, I was intrigued, to say the least. Not only is she the queen of green, but she also seems to be aging in reverse.

A colonic is a treatment that gets rid of waste and toxins from the body by pumping filtered water into you via the derrière. Sounds a little intense, right? Well, even for a wellness daredevil like myself, it definitely ranks pretty high on the “are you actually going to try that?!” list. But I knew if Va$htie could do it every month and share it with her thousands of followers, then heck, I could at least give it a try. I hoped to walk out of my first treatment looking as fresh-faced as she does.

I quickly booked an appointment at La Casa Spa & Wellness Center in New York City. It is where Va$htie gets hers done, so I knew it could be trusted for a classic colonic. The receptionist on the phone firmly let me know the “dos” and “don’ts” to follow 24 hours before my treatment the following day. Do drink lots of water (a gallon), don’t drink alcohol, do mainly eat fruits and vegetables, and don’t eat meat or dairy. I was firmly instructed not to eat or drink anything two hours before my appointment. She warned me that following these rules would ensure that my treatment would be effective and go as smoothly as possible — for both myself and my therapist.

After hanging up, and handing over my credit card info, I realized my colonic knowledge was minimal at best. So I hopped on Google to get the basics down before my appointment. And what I discovered simultaneously intrigued and unnerved me.

I learned that I could expect toxic waste to be eliminated from my body. This waste — which would otherwise just be left in my system — typically becomes the breeding ground for the type of bacteria that lead to us getting a cold or the flu. Gross, I know! Colonics are also known to help us better absorb the vitamins and nutrients we’re shoving into our mouths via those kale salads and green smoothies. I even came across a story about a woman who lost 15 pounds after getting a colonic.

The holy grail came when I stumbled upon an article that said I may leave my 50-minute session with skin shining brighter than a diamond. I hoped that the colonic would help turn my dry, bleak skin into dewy goodness. As someone with very dry skin, looking hydrated and glowy is how I judge the effectiveness of any skin-related treatment I receive. If a colonic could help with that, then I would be a believer. Oh, and if it could make my period pimple (or two) disappear, I might get one every week. I was now convinced I had made the right decision to let a complete stranger help my insides get squeaky clean.

During my research, I did read a few articles that warned of the health risks associated with colonics, including dehydration and nausea. Not one to be easily deterred, I decided to still proceed with my appointment. (Plus, I had already missed the 24-hour cancellation window.) However, if you have any health issues or concerns, I would highly recommend consulting your doctor before booking an appointment.

When I arrived to my appointment the next day, I was greeted by a very friendly young woman. She asked me to fill out some paperwork before getting started. Unlike the questionnaires you fill out at the spa, this one asked about my eating and pooping schedule – pretty intimate stuff for a first encounter. Then, I was introduced to Cher, the woman who would be performing my colonic.

Cher instantly put any lingering nerves or second-guessing to rest. Her calming and zenned-out energy let me know I was in trusted hands, literally. I headed to the changing room and undressed from the waist down (yes, everything comes off) and slipped into a paper gown. I took a few Snapchats of me in the paper gown and flip-flops to let my friends know I was about to take the plunge, and I met Cher back in the room. 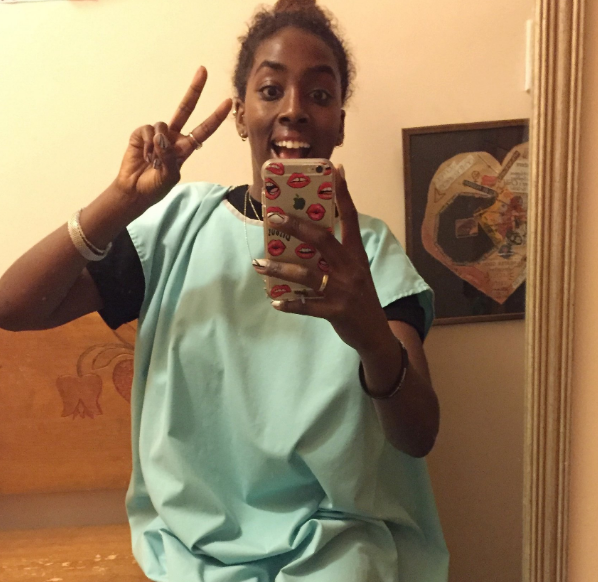 She assured me that she was a colonic pro, a 23-year vet who even performs them on herself, and that my nervousness was completely normal. “Most Westerners [Americans] have issues with anything that happens below the waist,” she said, a native New Yorker herself. “We just don’t want to talk about something that makes us feel embarrassed or appears to be less than appropriate behavior.”

According to Cher, the way people in the States talk about using the restroom (read: it’s a private matter that we don’t like to discuss with anyone, even our spouse) is uniquely American. And I’d have to agree with her.

After opening a new tube from its package (you want to make sure your hydrotherapist does this in front of you to ensure the tube is sterile), she instructed me to roll over onto my left side, moving us into the most intimate part of the session. After counting to three and telling me to take a deep breath, Cher inserted the tube into my gluteus maximus, which is how the waste would leave my body. It was quick and completely painless.

I rolled back over onto my back and did my best to get comfortable and relax. No longer complete strangers, I felt it was now appropriate to hit my new best friend with some questions — starting with skin care.

What most people don’t know, Cher told me, is that the skin is our largest eliminatory organ. “Have you ever noticed how lifeless your skin looks when you’re not feeling well?” she asked. Ugh, yeah. “Well, imagine how much acid and toxins must be in the organs and tissues when the body manifests — acne, psoriasis, eczema, and other skin problems,” she continued.

By this point, Cher was alternating between gently massaging my stomach and feet to help facilitate the water’s movement in the colon. She also periodically turned on the hydrotherapy unit’s pressure to allow the warm, filtered water to flow into my colon. Each flush of water lasted only a few seconds. During the course of the session you see (yes, it gets a bit graphic) and feel everything. As the water pressure is turned on, your body experiences a bloating sensation, similar to when you’ve chugged a bottle of water too quickly, which then gives way to feeling like you have to urgently use the bathroom. I did my best to follow Cher’s advice to let my body take control (which meant no tensing up or pushing), but that proved to be easier said than done.

Sensing I was intrigued by her skin care knowledge, she kept it coming. “Your skin has thousands of pores that exude waste when you sweat,” she explained. “But even your skin gets clogged with dirt, cosmetics, and oils, making it very difficult to expel the waste. The more you clean out the colon, the more the other organs eliminate toxins, which takes the load off the skin, leaving it radiant and young looking.” Was the secret to clear, prepubescent skin a tube and water pressure and not my current 10-step skin care routine? Only time would tell.

By this point, my session was almost over. Other than the occasional comment of “wow, you’re having a good movement” or “does your diet contain a lot of nuts,” I almost forgot I was even getting a colonic.

As a first-timer, Cher recommended I come back two to three more times over the course of the next two weeks, followed by monthly visits. She explained that doing so would ensure the colon was truly clean. She could tell we hadn’t gotten everything out during this session and doing multiple sessions in a short amount of time would ensure my body was truly detoxified with optimal results. This of course varies from person to person, but she always recommends at least two back-to-back sessions. I typically wait at least 24 hours before deciding if I’ll be a repeat offender of a treatment — I’ve got to make sure it works before I commit to spending my hard-earned cash again.

After making a quick pit stop in the bathroom (you want to make sure your body’s done doing its thing), I got dressed and beelined to the closest juice shop, conveniently located just a few blocks from La Casa, for a vegetable-based juice. You’ll want to wait a few hours after the colonic before consuming solid foods again to avoid a potential accident on yourself, which I thankfully did not experience.

Immediately after the colonic, I felt clean and extremely empty in the best way possible. My step was lighter, like I was walking on clouds. While I didn’t officially weigh myself before or after the treatment, I certainly felt like I had lost a few pounds. Score! I didn’t experience any of the gas or leaking that Cher had warned about, and thankfully the only effects I felt were positive ones.

The first thing I did when I got home was meticulously check out my postcolonic skin. By this point it had been a few hours since I left La Casa Spa. My dry Winter skin definitely had a brightness and dewiness that wasn’t there precolonic. It kind of looked like the glow you have after a killer workout. Based on what Cher told me about how colonics and sweat detoxify the skin in a similar way, my skin’s appearance made a lot of sense. Upon closer inspection (re: smooshing my face against my bathroom mirror), my pores also looked a lot smaller. While I was hoping the stubborn pimple on my chin would have magically disappeared, it didn’t.

Before making a final decision about my colonic experience, I decided to wait 48 hours instead of my typical 24. At the two-day mark, my body was still feeling light and clean and my face was still giving a postfacial glow. I was also having a regular bathroom schedule — Cher had warned I may experience some irregularity (either going more than normal or less than normal).

Since the treatment — including a tip and a bottle of probiotic pills Cher recommended I buy — cost me the same as the average facial, $150, I’ve decided to get them done on a monthly basis. Unlike a facial, both the inside and outside of my body were left feeling squeaky clean. I have a flatter tummy, and my skin is more radiant.

When I asked Cher why she believes everyone should at least give a colonic a try, she told me: “Colon hydrotherapy is a thorough, hygienic, and surprisingly private and stress-free way of discarding the toxins, fecal debris, gas, and chemicals that build up in the colon over time. So there is nothing to fear. No odor, no embarrassment, no stress!” And I couldn’t agree more.